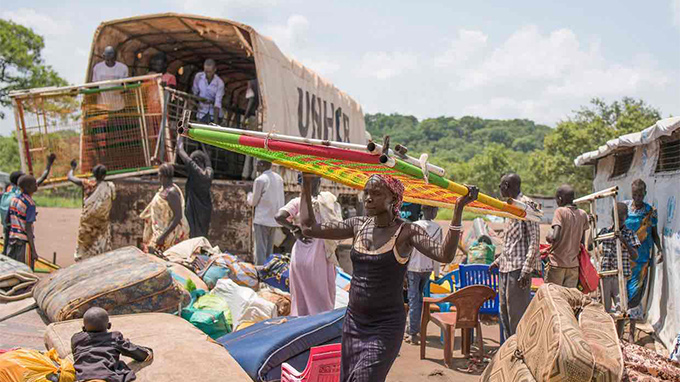 When South Sudan descended into renewed violence last July, Bidi Bidi refugee camp was expected to hold 40,000 people. Soon after it opened, it started growing by twice that number every month. Now it’s a sprawling expanse of mud-walled huts and tents, inhabited by 270,000 of South Sudan’s refugees who have fled violence, hunger, and rapid inflation in their home country.

The Bidi Bidi settlement is believed to be the largest single refugee settlement in the world and it was built just six months ago. Its rapid growth is a reflection of the ongoing crisis in South Sudan, which the UN has warned could be on the verge of genocide.

Every day, thousands of people cross the border into Uganda. This year, the UN expects another 300,000 South Sudanese refugees to arrive, adding to the more than 600,000 already here. Of the current refugees, 86% are women and children.

“These innocent women and children who are fleeing now, they need a home,” says Robert Baryamwesiga, the Bidi Bidi settlement commandant. “They need a life, a normal life, because they are innocent. They are not politicians. They are just victims.”

Uganda has a unique refugee policy, allowing refugees in the country to work, travel and mix with the surrounding community. Scattered throughout the settlement are markets where refugees sell vegetables, packaged food and clothing. Entrepreneurs have set up small shops to fix motorcycles and build furniture. Schools, playgrounds and medical centers set up by aid groups cater to thousands of people.

In December, Bidi Bidi closed its doors to new refugees except for those reuniting with families already here. New migrants are being sent to a new settlement just an hour away, and work is already under way for a further camp.